1966 Chevrolet Nova SS Clone For decades much of the classic car world has been broken down into two distinct schools of thought: those who believe automobiles should be kept or restored to as original as possible, and those who are willing to mix-and-match drivetrains, trim, and features from a specific era in order to create the vehicle they want to drive. Its important to mention that the second group doesnt refer to restomods, or the modernization of classic metal. Rather, its composed of owners who have no qualms about taking a regular Chevelle coupe and transforming it into an SS. The practice is called cloning, and its been a part of the collector car landscape for as long as the hobby has existed. Minimalistic with maximum function, thrift, not revolutionary in concept or execution, a compact grocery getter, pick the kids up kinda car, here in our hallowed halls. It is so pedestrian you would walk by it and never notice it. However, this does not detract from its charm, and the fact that it is a grocery getter, but now with a stroker engine, a refreshed interior, improved suspension, and electronic ignition. Much more to come! Exterior With a respray in the Claret Red Pearl Metallic which bathes laser straight steel that has near perfect gaps. Its definitely the deep end of the pool when it comes to looking at this car and as consignor states all was totally stripped off prior to this wonderful application. Now badged with Super Sport badging, tinted windows, and nicely preserved chrome trimmings. The car has a strong stance and looking it over one can sense that it is as solid as can be throughout. 15-inch rally wheels and raised white lettered rubber for this simple but elegantly functional design car from the mid 1960s. Interior With all front buckets and rear bench seats in nice black vinyl we are given a glimpse into the originality of the factory seating design and setup. These seats float in a sea of black new carpet. A tight front dash with original instrumentation shows also in black. This presents as very clean and very simple and has a wood rimmed steering wheel in front of it. Also, a new retro radio is in the center, along with some aftermarket gauges hanging off of the bottom of the dash. A fully restored center console now houses a Hurst shifter and sports SS badging as well. The trunk has speckle paint with a straight flat rubber mat in the center supporting the spare tire and original jack. Plenty of attention to detail on this consignment. Drivetrain Getting to the heart of the matter and why we can use the word clone within this immaculate engine bay is a 383ci V8 stroker. It is made up from a Dart SHP block with Arias pistons and a crower cam (.519i/.540e kit and 226i /236e duration). Aftermarket aluminum heads are on and an Edelbrock 4-barrel carburetor is feeding it. On the back is a Muncie M21 4-speed manual. The axle is a 10-bolt 3.08 configuration and noted headers are on for the exhale. Just pristine under this hood, not unlike the rest of the car. Undercarriage Looking much like it has been blasted then sprayed in black, there is no rust to be seen on this car. Independent coil springs suspension is on the front, and leaf springs are bringing up the rear. Power disc brakes for the front and power drums for the back, along with a complete stainless-steel exhaust. Drive-Ability Out test driver said it was a pleasure to drive, as it started quickly, drove great, all options worked flawlessly and was an overall tight car to drive. There were no reverse lights, the power steering groaned a bit negotiating a low-speed turn, and the front tires rub during right turns. A clone and a well performed frame on restoration. Nice clean and powerful 383ci stroker that consignor states has a mere 75 miles since the completion of this job. All straight lines and all looking good in its newly cloaked SS clone form. VIN DECODE 116376N125053 1-Chevrolet 16-Chevy II 400, Nova V8 37-2 Door Coupe 6-1966 N-Norwood, OH Assy Plant 125053-Sequential Unit Number TRIM TAG ST 66 11637-1966 Chevy II Nova 2 Door Coupe BDY NOR50036-Norwood Body # TR 735A-Blue Standard Vinyl PNT CC-Ermine White E-Tinted Glass, All

Transport your classic or collectible car the high tech way. It starts with an instant guaranteed quote on our easy-to-use online service. Then you receive real time updates from pick up to drop off, so you know where your car is every mile of the way. Click Now! 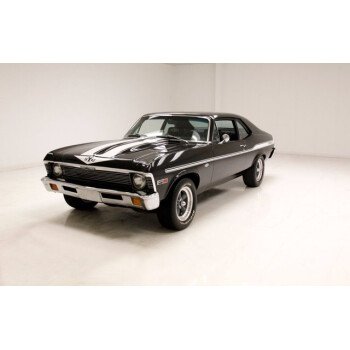 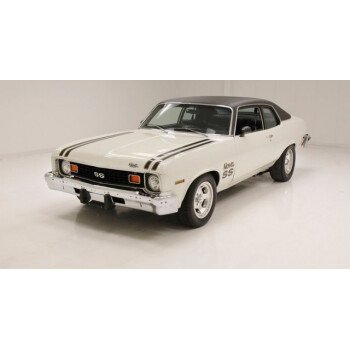 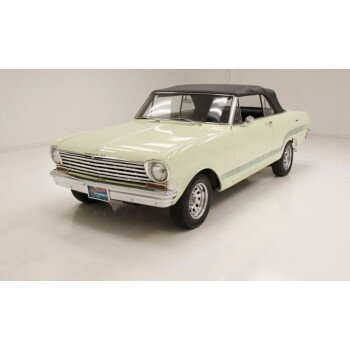 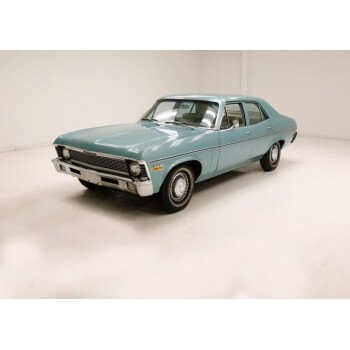